Even though the event culminated in, the man wasn't in his usual self. The vigour that he possessed at the moment made him lurk and lust, just like an 18 year old with visions of that of a virgin who had moved into the realms of fantasy.! The hotties, the aunties, the Chai-Wali mausi, and even the teenager didn't miss to be the apple of his eye (Oops, I meant Apples!). May be it was just the effect of his vodka!

He still tried to suppress his long,long high spirited feelings. But aah- our minds and hearts never listen to a word we say! And nor did his. His Battamiz Dil nudged the event he tried to focus in, and there it went bouncing and leaping onto the chests of the beautiful young ladies all around him. He tried and tried to snatch away his eyes from them, but Alas! All was in vain. His mind was tootling around the hot and wild nights he had with his wife and his girl-friends! He wanted to go back home and watch the Big Boss series where they had Sunny Leone captured in the house! Aah, he just couldn't wait a second more for the event to end.
He started humming the famous song from Jism 2 - Abhi Abhi Toh Aaye Ho!!

Luckily, the event didn't take much to get over. Thank God, now he can rush away to his bedroom. He got up and was preparing to dash just when the group of his colleagues occluded the way to his wisdom. Oooohhhh Nooooo!!!! What more could one have asked for at the moment of such a High Time!!

His mind pleaded to all his colleagues to let him go! He just wanted to go. His mind and heart started to pin and choke. But who knew he will find "His Wisdom" in that Hot Crowd?! 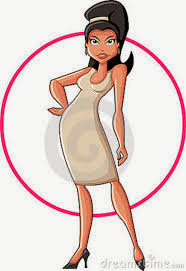 Her long hair, her beautiful kohled eyes, her stunning neck-piece, her slim waist, her sexy legs, her tight skirt and her ..... I mean Man! She is so hotttttt!!!!!

Uncle T lost his control and went back to his adolescence. How he once craved for someone exactly like her! And then over the years, how his luck got worse, his parents saw his wife and "Don't know how they liked her" and then got him married to her!! His smart little boneless thingie never ever saw justice! This is so unfair!

But he knew this was it and yeah, she was her! May be she was around 30 years younger to him, but then when did love start to count age?!!

After a lot of chit chats, he took her aside. She seemed cool and very pleasant. Uncle T knew he had earned his luck. So much of hardships are always welcome when the fruit can be this sweet. He wagged his tail in amusement. This is going to be a Blast!! Oohh-- Yeah! ;)

Seeing an escalator and the rewarding chance, Uncle T bounced upon her. "Ohh Babyyy, You are so damn hawt!! I'm hawt as well, ain't I?!!"

The girl caught her breath and tried to retreat back. She thought-- " Ohh Noo Buddha, You're not!! Leave me, man!!"

But there he was jumping in his wild thoughts of fantasy! He pounced upon her and showed her his best! Yeah, he did!! But he must have not imagined his single "High Time" can make him rest behind the bars for the rest of his life! Never ever! Its so unfair! 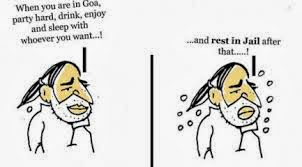 He straight went into the news! Yeah, he did a lot to be in news earlier but this was not how he wanted to be in it!! It was indeed a Blast for him!

His boneless world came crashing down! He didn't want things to be like this, did he?! He was trying to be just friendly with the girl. He has always loved his wife, you know! He has a daughter as well! I mean, how can he just do such a thing! He Loves his family, man!! But now, how can he tell this to the world?!